I started this blog post over a year ago I am ashamed to say. I couldn’t find it in me to finish it. So I have just turned it into a small photomontage of the bookstores that drew my attention.

My bookish journey has not gone so well this time around. The courses I am doing aren’t grabbing me. Neither have I been walking around the city all that much. However with the Feria del Libros looming, I’ve been taking photos of the multitude of bookstores and kioscos 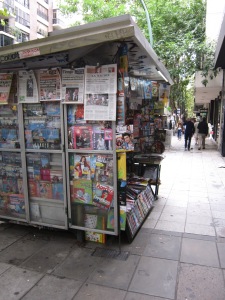 A kiosco can sell anything from the paper to literature

This is the second hand book market near Plaza Italia, a bit like the book stores of the banks of the Seine in Paris. 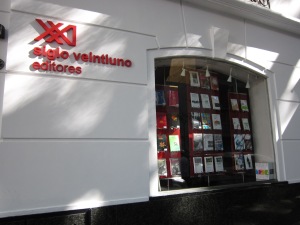 One thing I can say about the Argentinians, is that they love their literature. There are second bookstores stashed all over the place. If they are small independent stores, they will specialise in a certain area: philosophy, sociology, maths or esoteric literature. 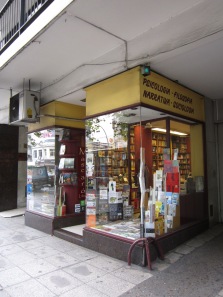 There are also small franchise type stores like Cuspide, who sell best sellers and cheap books, pretty much like Angus and Robertson in Australia.

This was the first secondhand bookstore I discovered in 2006, near Corrientes Ave.

My favourite though is Andre Casares.  I don’t have a picture, but this is an antiquarian bookstore, and well worth a visit.

And then there are places that are just schmick. The store above was closed on a Sunday, but if well worth a visit, and the one below, used to be a theatre, now converted into large bookstore, with cafe on stage. 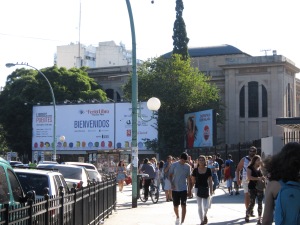 At the Feria del Libros at La Rural  in Palermo

I was lucky to go to the professional days; so a lot less crowds.

Miniature books; lots of stands had them

The stands were mostly innovative, but the layout was too big. You needed a segue to get around. 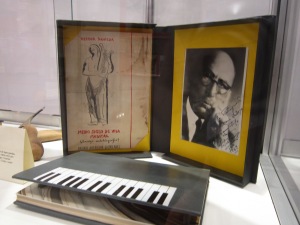 I went to the EARA stand, the Argentinian Bookbinding Guild to visit my friend Dina Amoli. She had taught me japanese bookbinding techniques during my last visit

The guild was very well represented with a range of books 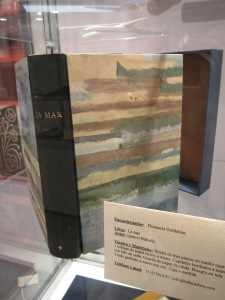 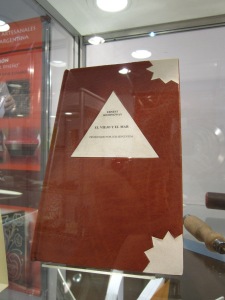 And finally Moebius at a great little crafty arcade

If you can read spanish, are into books, then Buenos Aires is the place for you.

And finally but not least….my wanderings through bookstores

Wandering slowly through bookstores used to be one of my favourite pastimes. I would buy books just to own them; cooking,  crafting, secondhand books, new ones.  I couldn’t bear going to a library; how could you obscure a cover with a label, or worse, stamp an ugly stamp on a page?

As I grew wiser, I started collecting books. At first woodworking, specifically on boxmaking, then papercrafts and calligraphy. When I became a mother, I turned to children’s literature. My son has a fine collection of interesting books, and I do believe that reading him unusual picture books made him into the boy he is today. I would buy one book in several different editions simply for their bindings. I started buying hardcover books

But now I am thriftier; I use the library, and simply stroll in bookstores to see if I can find that special, out of print book, or perhaps some special manual. Besides, it is only when one moves house that one realises that books weigh a tonne.

But here I was in England, land of the book, of the secondhand book. What was I going to find?

Tell you the truth, not that many bookstores at all. I took some pictures of some of the more interesting stores. I suppose nearly everyone is reading ebooks on some sort of device. Not me. I still love the feel and smell of books.

On my reconnaissance day I found Treadwell’s store near Senate house. When I mentioned this to Anthony fellow student and nail biter, he laughed derisively and said : “the witches’ bookstore?” 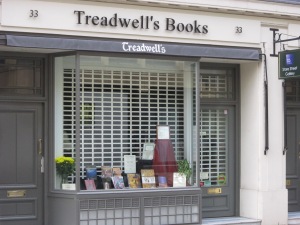 I hadn’t realised it was an esoteric bookstore behind its grills. What attracted me was the small sign in the window that said something along the lines of “ Browsing is a lost art. Please feel free to come in and browse”. Its cosy  interior was also a nook for fortune telling.

Again in my wandering I came upon “The School of Life”. Not exactly a bookstore; a self help organisation which sold books by Alain de Botton. I wished the shop had been opened because it looked like an interesting place to be. 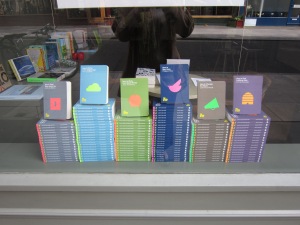 When I asked about, the locals suggested two places: Foyles or Skoob Books. Foyles was disappointing, hence no photos, but Skoobs was the quintessential second hand bookstore, and cute to boot. It reminded me of a similar underground bookstore we have in Canberra “Q Books”.

The entrance alone deserved a whole page to itself. It promised to be a fount, a treasure trove, and had I larger bags, I would have bought more books.

This is the type of store I can see myself owning. Tumbles of books everywhere about anything and everything. I had been expecting second hand books stores to be like pubs; one around every corner. So  it was disappointing , and a sign of the times. I still believe that people read, however access to the internet makes reading and publishing any piece of writing so much easier than having to go through a body of peers or a bunch of editors and publishing houses.

At the Last Bookshop in Oxford you can buy any book for two pounds.

How could I be in Oxford and not visit the Oxford University Press? It wasn’t a very inviting store I must say. I don’t know what I images I had in my head.

Oxford University Press; where so many books, text books, non-fiction, have been published. It is so famous. It was silly to have expected something grandiose; grandiose isn’t even the word. Possibly,  interesting. But it really was a mildly boring shop, and could have been anywhere amongst other thousands of boring shops with books whose covers left nothing to the imagination and purveyed no sense of wonder.

Maggs Brothers in London held a reception for all the students from the Rare Books Summer School. The diminutive entrance belies what is hidden behind the facade.

Mr Maggs, Ed, was a very solicitous host. It was an opportunity to talk to our class mates socially. But with every event where people are thrown together, the evening flet a little forced. Not many of the students turned up; but of those who did we had an enjoyable and relaxing evening.

We were left to wander through the one room store, perusing books from the shelf. I found out a little later that the real Maggs store was the basement warehouse underneath the large patio area where we were picking on pork pie and samosa and chatting. We were not invited down there.

Perhaps it was because Iw as travelling that I resisted the urge to buy. However I can now see that I could get a lot more out of a second hand bookstore than simply another book to read: it could be another book to rebind!

The traditional craft of bookbinding

Some remarks—often with photos!—about manuscripts and the languages, literature, scholarship, and history of Christian culture in the Middle East.

A Database of Eighteenth-Century Printers' Ornaments

Echoes from the Vault

chasing wisdom... one epiphany at a time

Treasures of the Library at Balliol College, Oxford

The New York Academy of Medicine