In a previous post we examined  lontars,  collections of dried palm leaves which have texts or illustrations inscribed on them, and held together by either a central thread or threads on either ends.

Papyrus and dried leaves do not have a very long life, and this was known to contemporary writers. As a medium they are not very flexible. It seems only logical that the invention of paper would produce an evolutionary change in how the written word was stored.

The fragility and handling difficulties of the lontar, or the Chinese  pothi made from bamboo slats, was overcome by writing on long sheets of paper.

The continuous form of the scroll was first developed in China during the Tang dynasty.  While much of the writing was previously done on silk, it wasn’t until the Tang period  that artists began to use paper as their medium. Scrolls can be read horizontally, from right to left, or vertically. Scrolls were not necessarily for every day use. While some scrolls contained religious texts, scrolls depicting landscapes and scenes were used as decoration.

The scroll allows for the slow development of a story. Presumably, presenting bite size chunks of information allows the reader to concentrate and be fully aware of what he is seeing or reading. This form was prevalent until the Song dynasty.

In Asia there are two varieties of scroll:

The vertical scroll can also be used for text, however as a picture scroll it is called biao-fa or guafu in chinese or  kakemono in Japanese.

In its construction, the Asian scroll differs to the European scroll in that it is made up of several sheets of paper, attached around and behind the main scroll piece. 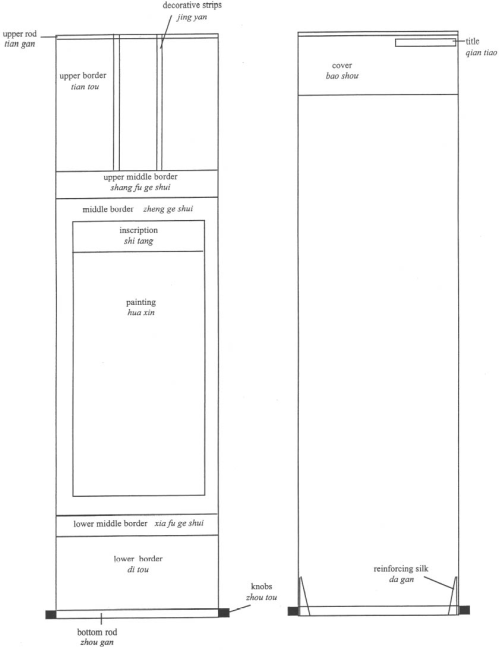 In Europe,  the parchment scroll had been used from the earliest times and even after  the advent of printing. In fact, scrolls are still in use today as away of archaizing information; that is, increasing the importance of the information contained within it, hence the bestowing of university degrees in scroll form.

Parchment scrolls were easy to carry in one’s pocket, vest or satchel, making information easily transportable. If you needed to add information but weren’t too sure how much needed to be added, scrolls were quite adaptable. A piece of parchment could easily be sewn onto the end. Scrolls were also particularly handy for maps or for writing out genealogies. They were used extensively in mass, where the priest read out parts of the mass, and while reading the scroll an image could be seen by the congregation.

However, unrolling scrolls must have been tedious and inconvenient. It is no wonder that in Asia at least, the concertina provided a first step towards the codex. While the pages of a concertina are folded, it is usually read in a two page spread, not necessarily as a drawn out concertina shape. It is my experience that more often than not Asian concertinas horizontally. 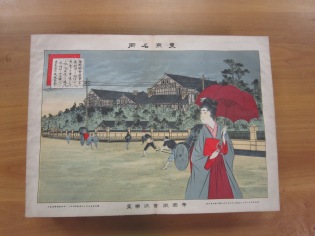 Concertinas sizes depend on lengths of paper.  One sheet may have been long enough to contain all the necessary information; however it is likely that several sheets would be pasted together end to end to form a continuous length. A search on the internet will reveal a myriad easy ways to make a concertina: folding a single sheet of paper, attaching two boards on the end, and there is a book.

Different ways of folding a concertina and attaching separate leaves

Book artists have embraced the idea of the concertina because it is a quick and effective means of producing a book. if you want to learn more about making concertina bindings in the Asian manner,  Kojiro Ikegami’s seminal book on Japanese binding techniques[1]is a terrific place in which to start.

The lontar – an early form of book

Roughly two years ago I posted about bark books. Well, in continuing with an asian theme, let me tell you a little about lontars.

What is a lontar?

Made from flattened and dried palm leaves, lontars usually contained religious texts. They are contained between two wooden covers, and held together with a string, either threaded through the center of the leaves or at either end, finished off with a chinese coin or perhaps a wooden peg.

MS6240-7 Lontar with wooden cover and threaded in the center. Finished with old chinese coin

Mainly in Indonesia, Japan, Thailand, Burma, China. Incidentally in Malaysia, Philippines and Nepal. In India and sometimes in China they are called pothi

A pothi is made from bamboo slivers, and usually fully threaded.

In Thailand, the process is very different (bai-larn). Leaves are picked and then dried in the shade. The stiff ribs are removed and then they are cut to a uniform size. This is done by collecting them in bundles of 50 or so, placed between wooden boards and then trimmed.

The bundles are placed in a kiln for about 24 hours. The kiln has 2 levels: the lower one for the fire, the upper for the bundles. The fire, built in the lower half, is regulated by the fact that all the doors are closed. After 24 hours a black oil exudes from the leaves and is left on the sides of the bundles. After cleaning this excess, the bundles are opened and each leaf is cleaned.

Each leaf is then held over an open fire for a little while and then polished with a cloth. This process makes the leaf absolutely dry and ready for writing.

Before writing or painting, the leaves are coloured or lacquered, either on the edges with vermillion or on the face of the leaf black lacquer is applied upon which the writing was gold.

Incisions were made with pointed stylus. This is the most common method.

There are two incision methods:

Writing goes from Left to Right. This method of writing is made visible by rubbing in lamp-black or charcoal black pigment mixed with oil.

In India, mustard oil or gingili (sesame oil) was mixed with the black.

Crushed tree leaf juice may also be applied to get green lettering.

A paste of bean plant (dolicho lablab), eclipta alba, juices of datura stramonium or fastuosa, black ash, coconut shell and gingili oil was rubbed over the leaf. This was said to be a preservative against insects.

Writing with pen or brush applies the ink on the surface of the leaf.Sometimes both incision and pen work techniques are used on the one lontar.

Covers are usually decorated wooden boards. These may be painted or with inlays. To keep it together holes are punched and cord threaded through.

In small lontars a single hole in the centre is all that is needed. In larger lontars, a hole at both ends with or without a centre hole may be used. 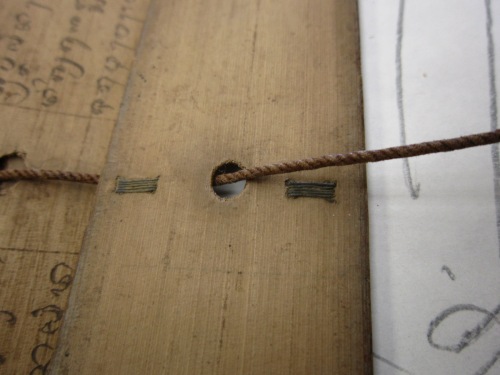 The title was written on a strip of either palm leaf, wood or ivory and was placed over the cover and included in the bundle.

Due to their very nature and the climactic conditions of south east Asia, lontars do not generally have a long life. The National Library of Australia holds 8 lontars in its collection, mainly from Indonesia but also from Thailand. I think that lontars and pothi are valuable to look at if one wishes to understand the nature of the book. As a means of information transmission, they were but one phase in the development of the codex. In class I get my students to make facsimiles from paper; the next stage is, of course,the scroll. After all it stands to reason that once the concept of  sheets (parchment or paper) was discovered, scribes could write down their stories and texts in much more efficient and convenient ways.

Next up then,  the scroll!

The traditional craft of bookbinding

Some remarks—often with photos!—about manuscripts and the languages, literature, scholarship, and history of Christian culture in the Middle East.

A Database of Eighteenth-Century Printers' Ornaments

Echoes from the Vault

chasing wisdom... one epiphany at a time

Treasures of the Library at Balliol College, Oxford

The New York Academy of Medicine